The history of JavaScript: A Journey from Netscape to Frameworks

The history of JavaScript: A Journey from Netscape to Frameworks and Libraries 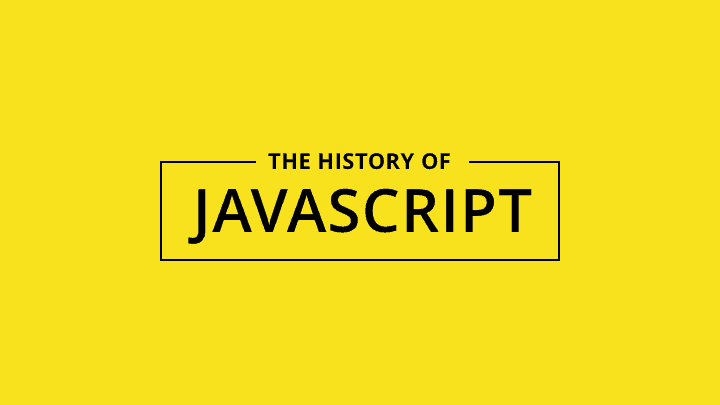 JavaScript turns 25 in 2020 with more than 10 million users. It is ubiquitous today and is one of the most frequently used tools for web development seven years in a row, according to Stack Overflow annual survey reports. JavaScript was born in 1995, conceived and developed in 10 days by Brendan Eich, a software engineer with Netscape Communications Corporation.

The software release stepped into a market clashing with the war waging between Netscape and Microsoft, riding the roller-coaster of rapid user traction and then spiraling down to its market exit. Yet from the ashes emerged one of the most extraordinary stories that raised voices of advocacy for the internet for the public. From this new vantage point, JavaScript was reborn. 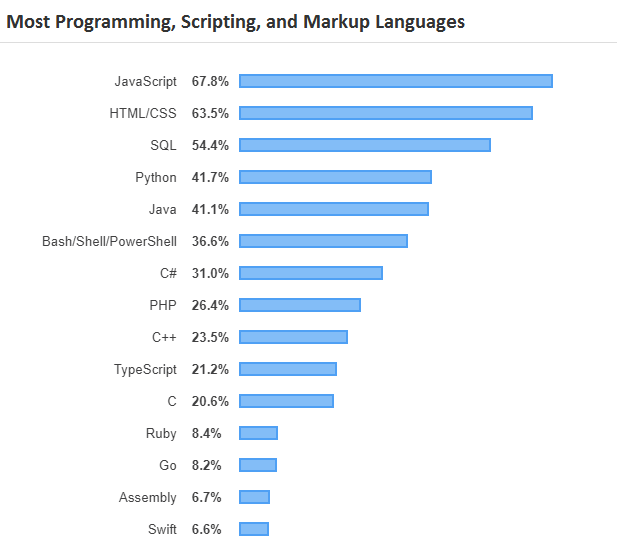 JavaScript came as a rushed assignment, mandated by Netscape management because the company was engaged in a fierce browser war with Microsoft. Time was of the essence. Microsoft had threatened to annihilate Netscape if it did not agree to divide the web browser market based on Microsoft Windows Operating System release vintages, according to Netscape’s depositions in a 1998 antitrust trial. Microsoft wanted exclusivity of the World Wide Web for its Internet Explorer accompanying Windows 95. Netscape, outraged, decided to fight back by including accompanying software with the release of Netscape Navigator 2.0 Beta browser. This planned scripting code, eventually named JavaScript, would enable non-programmers to create a website. 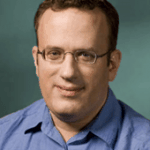 Brendan Eich’s work assignment held the attributes of mission impossible. The development needed to be ready in ten days for inclusion with the September 1995 release of the Netscape browser.

The work had to comply with the recently signed broad technology exchange agreement and product distribution signed between Netscape and Sun Microsystems. Additionally, management requirements stressed the importance of its appearance. The language needed to resemble Sun Microsystems’ Java language to feed on Java’s popularity, but it could not be Java in order to respect copyright laws. It should feel rich and functionally powerful for fast market adoption but should not be perceived as a competitor to Java.  Eich was forbidden from using Java’s object-oriented syntax. During development, it was code-named “Mocha” to be promoted as a companion to Java, a lightweight, friendly language for the non-programmer.

Eich pulled it off. He wrote the scripting language tapping into his knowledge of the functionalities of Scheme, added ingredients inspired from Self’s prototypes, and created his own Java-like semantic.

The name “Mocha” lasted only for the short period of development, morphing to “LiveScript” in its first release. This early version of code did not support exceptions. Operations often flagged errors, but his lack of practicality did not deter the users. The development community stepped forward to help debug the software. Sun Microsystems changed the product name one more time to JavaScript when it issued Navigator 2.0 Beta 3 in December 1995 and LiveWire became the brand of the server-side JavaScript for the Netscape Enterprise Server.

Prior to Netscape’s Navigator browser release in 1994, Microsoft had been focused on dislodging AOL with Microsoft Network, ActiveX, and VBScript and developed a new version of Microsoft SQL Server designed for internet applications in 1995. Following the Internet Explorer’s release in Windows 95, it did not take long for Microsoft to catch up with Netscape with the release of a reversed-engineered Jscript released in 1996.

Netscape asked the European Computer Manufacturers Association, or ECMA, to establish common standards. A technical committee, known as TC39 took on this mission in 1996. Intense debates between competing implementations thundered during the TC39 sessions. Despite little progress in reaching an agreement, the standards organization released its first set of specifications, the ECMA-262 in Jun 1997 that promoted backwards compatibility as a golden rule and tightened the definition of equality operators. The International Standards Organization (ISO) and the International Electrotechnical Commission (IEC) formalized the second edition, ISO/IEC 16262 in June 1998, and the third edition came in December 1999 with a version that represents the modern JavaScript, referred to as ECMAScript 3.

Microsoft pushed Netscape Navigator out of the market through bundling tactics and made the 1997 release of Internet Explorer 4, “The Web the Way You Want It,” the de-facto web browser in all Windows Operating Systems, the Classic Mac OS,  the HP-UX system and Solaris platforms.  AOL purchased Netscape Communications Corporation for $4.3 Billion in late 1998.  But by the year 2000, Microsoft had complete control of the web browser market.

Microsoft, in a monopoly position, no longer cared about standardization and TC39 was disbanded with work on ECMAScript 4 relegated to the vault.  Eventually, AOL let go of the Netscape Navigator employees in 2003.  And it would eventually sell 800 patents to Microsoft including the ones covering the Netscape browser in 2011 for $1.1 Billion cash. 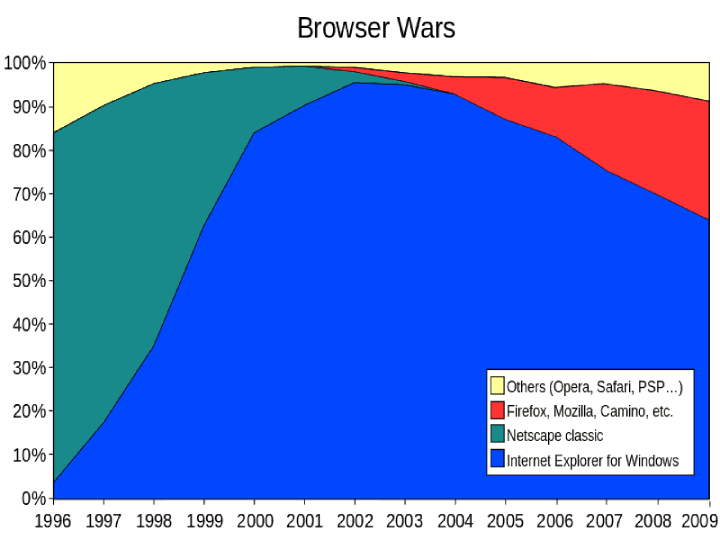 From the ashes of Netscape emerged the Mozilla Foundation in 2003. The mission of this not-for-profit organization was to protect access to the internet and keep it a public resource on a global scale. In 2005, Brendan Eich joined the Mozilla Foundation and its efforts to advocate successfully for the reinstatement of TC39 in consideration for the rapid growth of Firefox. Eich and Mozilla worked with ECMA on a new iteration of standards ECMA-357, also called ECMAScript for XML or E4X. Jesse James Garrett fueled the advocacy win with a 2005 publication describing technologies supported by JavaScript.

In coining the term AJAX, for Asynchronous JavaScript and XML, he described a set of techniques for developers to update web content asynchronously, help manage dynamic website content, and instruct a webpage display function independent of the platform on which it is viewed. Finally, 2005 brought the launch of jQuery, a library of JavaScript functions that can be called with just one line of code, and the Dojo Foundation was created to promote web open source projects including JavaScript toolkit to accelerate the cross platform app development.   It took until 2009 for ECMAScript 5 to be released followed with some updates in 2011 to align with ISO/IEC 16262. 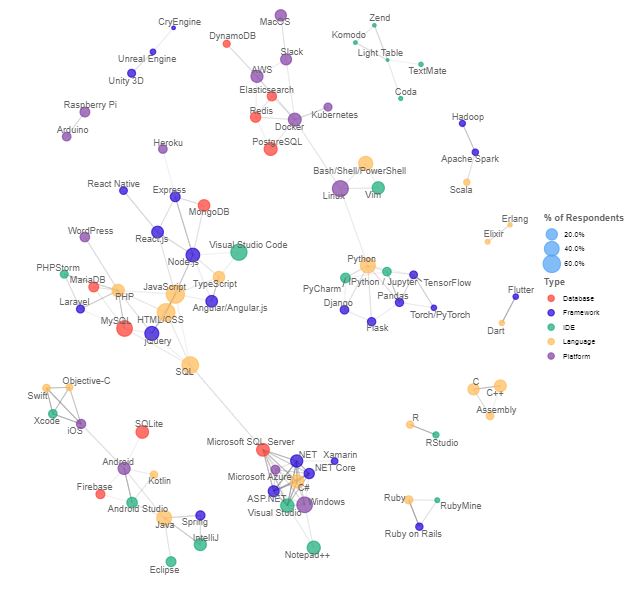 JavaScript’s rebirth gave rise to an eco-system of frameworks and libraries to ease the JavaScript coding for client-side and server-side developments. In 2006, jQuery made it easier to create more sophisticated websites.  Node.js came in 2009 as a client-side development technology to write scalable JavaScript internet applications. One year later, Backbone introduced the concept of Single Page Applications, and AngularJS further elevated JavaScript popularity with front-end architectures available to developers.  Knockout.js entered the market with a JavaScript library for dynamic user interfaces in 2013.

The list of JavaScript connected technologies has expanded in number and in scope in the past five years. The developers may favor some of the frameworks or libraries over others based on the target applications. What remains stable is the commitment of the global community to learn and advance the JavaScript connected tools openly and collectively. It is ubiquitous and under the standards guidance of ECMA-262 ECMAScript® 2019 Language Specification.

JavaScript’s history has weaved itself with the life of the internet. It was born from an urgent marketing push to seize the web browser market, it died in the hands of a giant competitor’s market maneuvers. It gained a second life with the advocacy of a non-profit organization that set a vision that transcended commercial profit with the belief that the internet is a public resource accessible by all on a global scale.

Users are entitled to their choice of browser and the web development tools best flourish from the knowledge of its users. JavaScript’s high popularity is fueled today by a large eco-system of other software tools that are built around JavaScript functionalities.