Apple iOS 14.5 Update: Get Ready for a bunch of Exciting Features

Touted as the biggest update to iOS 14, Apple is poised to roll out its currently beta-testing iOS 14.5 OS version this spring and the excitement levels of the iPhone lovers are, as usual, very high. There are plenty of welcomed features and enhancements such as the ability to unlock your iPhone using Face ID while wearing a face mask, new voice options for Siri, and 200+ new emojis that have kept the users on the edge of their seats as the software is nearing release to the general public.

Phone unlock with the Apple Watch

Face ID was an amazing feature, and everyone loved it until the COVID-19 global pandemic forced everyone to get behind masks. The half-covered faces exposed an obvious flaw when Face ID didn’t work when tried with masks on.

With the release of iOS 14.5 and watchOS 7.4, Apple intends to make unlocking an iPhone with the Apple Watch a lot easier, even if you are wearing a mask. The new “Unlock with Apple Watch” feature allows you to unlock your iPhone by using an unlocked and authenticated Apple Watch. To use this feature, you will have to be wearing your Apple Watch, and the same must be unlocked and passcode protected.

Now, the question that might catch your attention - Is it secure?

To prevent any mishap, Apple has kept the distance required between the two gadgets much, much smaller. In addition to that, a message appears on your Watch screen, which notifies you that “your iPhone unlocked by this Apple Watch.” Also, the Watch can only unlock the iPhone screen and can’t be used to authenticate transactions on Apple Pay or Apple Store that are locked with Face ID. You still need a full Face ID facial scan or a passcode to authenticate purchases. 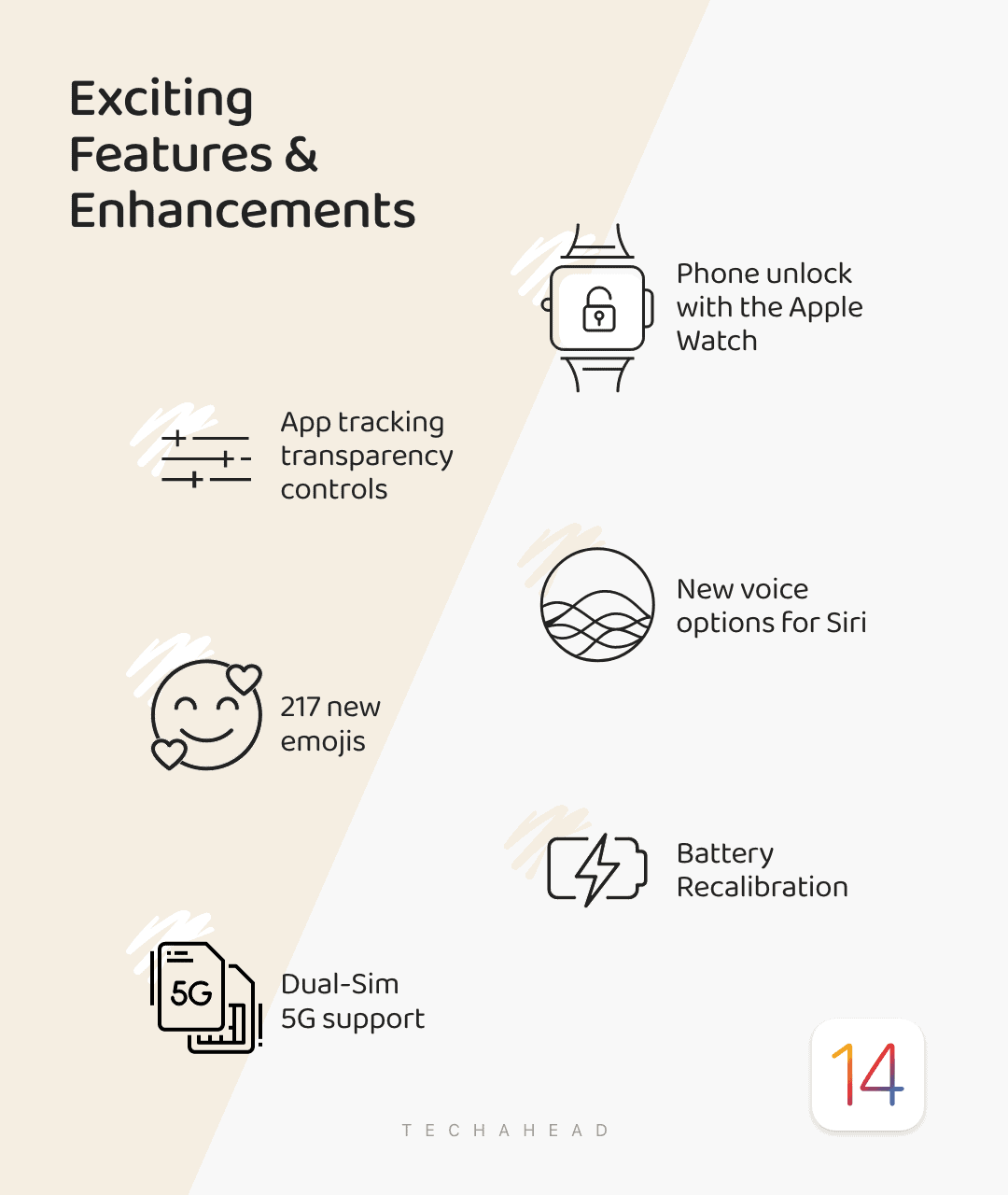 iOS 14.5 is expected to bring a new and crucial privacy feature called “App Tracking Transparency,” wherein you get control of whether you want to share your data with apps and websites owned by other companies. Simply put, the applications will now have to ask for permission if they want to track your activities outside the application, for instance, across other applications or websites.

Additionally, the app owners need to provide information about their privacy practices in App Store Connect and in case they use third-party code, they need to describe what data the third-party code collects and how will it be used.

Choose a new voice for Siri

Apple is known for its commitment to diversity, and keeping that in mind, it no longer defaults Siri to the usual female voice. With Apple rolling out two additional English voice options for Siri, users will now have the power to select a new voice for Siri. The new voices are 100% computer generated but sound more like human voices, and thanks to Apple’s strenuous efforts with its Neural TTS (text-to-speech), the voices can read the text clearly and naturally. To change your Siri’s voice, all you need to do is, go to Settings > Siri & Search > Siri Voice and choose your preferred Voice option from the given four options.

Apple’s iOS 14.5 comes with 217 new emojis to keep your chat box fresh and engaging. These emojis are sourced from the Emoji version 13.1 list approved by the Unicode consortium in 2020. The majority of the emojis are combinations of various skin tones and gender for “kiss” and “couple with heart” emojis. In addition to these, the list includes heart on fire, face with spiral eyes, face in clouds, mending heart, exhaling face, along with various gender options for people with beards.

iOS 14.5 will introduce the battery recalibration feature, which would let you remain updated regarding the health status of your device’s battery. The battery health reporting system of users having iPhone 11, iPhone 11 Pro, and iPhone 11 Pro Max will undergo recalibration once updated to iOS 14.5. The feature will recalibrate the maximum battery capacity and provide key statistics related to peak performance. It effectively addresses the inaccurate estimates of battery health reporting for the users.

Those who enjoy iPhone’s Dual-SIM functionality would be pleased to know that iOS 14.5 finally set forth global support for 5G in Dual-SIM mode on the iPhone 12 models, which until now was limited to LTE across all countries, except China. With iOS 14.5, iPhone users can enjoy 5G speed on the data connection while using the Dual-SIM mode.

Once the developers are done testing the betas, Apple should officially release the software to the public in a few weeks after ironing out all the bugs and critical issues. Well, if you don’t have the patience to wait for its public release, you can download the iOS 14.5 public beta by signing up for Apple’s Beta Software Program. As a precautionary measure, download the OS on a device that you don’t typically use, as it may contain some bugs.

The world has its eyes on the upcoming features of the iOS 14.5 operating system, but they are of special interest to app developers as these features dictate the terms of their changed approach henceforth. Experts at TechAhead, one of the leading providers of world-class iOS app development services, are always three steps ahead in analyzing the latest OS updates to enhance existing applications and create a whole new generation of super-efficient iOS applications. Reach TechAhead app consultants with your app idea and disrupt the industry with a next-generation mobile app.