Application Programming Interface (API) is a basic building block of procedures and functions that enable the mobile app development that access data and features of other applications, services. In other words, it connects different applications and let them complement each other.

APIs are like a boon for developers as well as enterprises. When writing a new program, a developer does not have to begin from scratch to build a core application. Instead, they can utilize (contract) certain functionalities by using an existing piece to do a better job.

APIs can be divided into four categories: 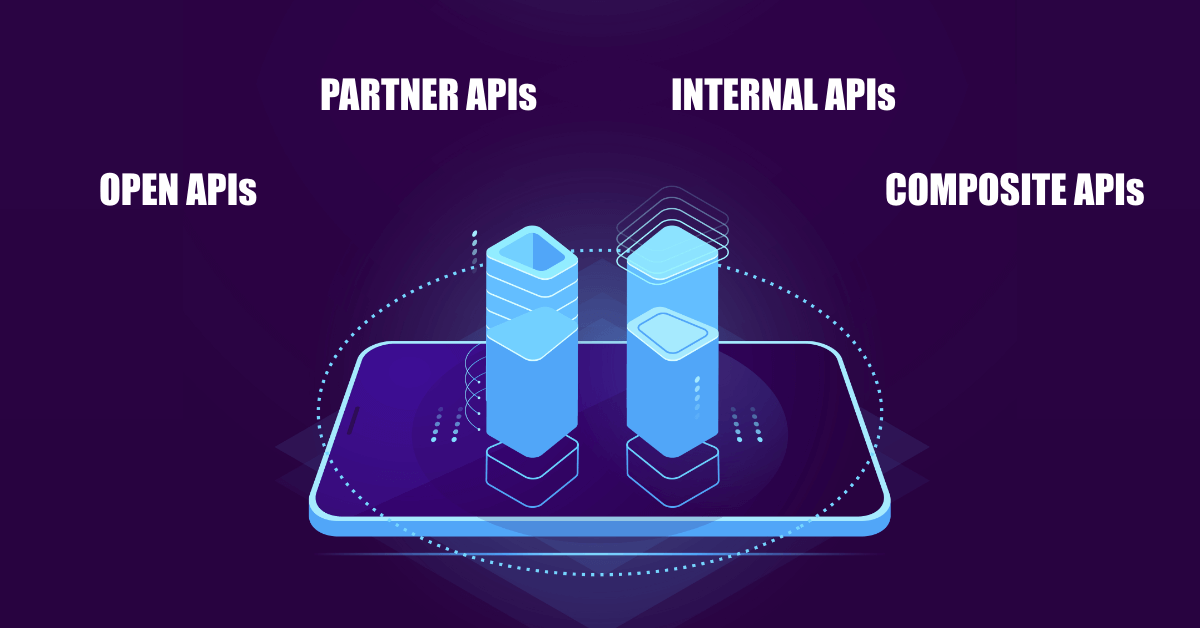 Open API or Public API – This type of APIs are publicly available for developers and provide them with programmatic access to a proprietary software application or web service.

Partner API – Unlike Public APIs, they are not freely accessible for everyone. A company or developer needs a specific entitlement to access these APIs. There is an on-boarding process with a specific authentication workflow to gain access to partner APIs.

Internal API or Private API – They are not exposed to external users and are meant to be used across different internal development teams for enhanced productivity and utilization of services.

Composite API - Such APIs combines different service and data APIs. They are built by combining the existing API functions that can perform multiple tasks in a single call. It makes the execution process faster and enhances the performance of the listeners in the web interfaces.


Generally, in case of APIs for web services, developers prefer RESTful architecture and for enterprise app that needs high-level security and is backed by more resources, they incline towards SOAP API.

Basic API Terminology That You Must Know


API Key – An API key is a unique identifier or code passed in by computer programs to authenticate the developer or user or calling program.

Endpoint – Touchpoints of the interaction between API and a server are known as the Endpoint.

JSON – JavaScript Object Notion (JSON) is a data format used for APIs to interchange data on the web. The interchange of data can happen between two applications or a server and a web application.

GET – GET is a method which is used to request data from a server at the specified resource.

POST – POST is a method which is used to send data to the API server to create or update a resource.

OAuth – OAuth is an authorization framework or open-standard authorization for APIs. It provides secure and limited access to end user’s data to be used by third-party websites or applications without accessing their password.

Latency – The time taken by an API for processing a request and responding is known as Latency.

Rate-Limiting – It is a process of controlling the rate of incoming and outgoing traffic. It is also defined as the number of requests a user hits to API each time.

API Throttling – It refers to the process of controlling the usage of APIs by the consumers for a specific duration.


Apigee – It is Google’s API development management tool. It is helpful when a developer is creating connected apps, or a company is updating legacy apps or facilitating data transfer between services and apps.

API Spec Converter – It is a tool used by developers to convert between different API spec formats.

APIMatic - It is a developer experience platform for web APIs. It is used by developers for generating SDKs for their APIs for 10 platforms and keeping them in sync with the API updates.

Sandbox – It provides an easy and quick mock RESTful API from API definitions. It reduces the cost and risk associated with calling third party API during testing.

Postman – It’s an interactive and automatic that allows developers to run, test, document, and evaluate the performance of their API.

SoapUI – It is an open-source testing tool. It can operate on cross-platforms and can automate both functional tests as well as non-functional tests. It is generally used for executing compliance, regression, security, and load tests for Web APIs.

Swagger – It is an open-source framework that is used for developing APIs. Swagger is being used by top technology giants such as Apigee, GettyImages, Microsoft, and PayPal.

JMeter – It is also open-source software. It is used for performance testing of a RESTful API.

Here’ a list of some important points which a developer should keep in mind before and during the creation of an API. It will accelerate the development process and help everyone on the team to stay on the same page.

Authentication means verifying the right identity. Deciding whether a verified user is or is not allowed to perform an action on a specific source is an authorization. For example, Sam (an authenticated user) can get a resource but not allowed to create a resource.

JWT, OAuth, and OAuth2 are some of the commonly used specifications used to handle this authentication and authorization.

With time your database will grow. Once that happens, you will begin to notice that some resources are taking longer than usual time to retrieve. Some of the common ways to approach this scenario are to cache your objects and/or create pagination/filtering.

By sorting, we ensure that data is received by the user one by one as per the requirement, modification, and the condition applied. Paging is the process of determining how much data must be displayed and at what frequency. These things ensure minimum processing time, good response time, and high-level security.

Developing a Cache strategy helps the user in retrieving resources at an amazing speed. Once your data is ready to be consumed in an in-memory database the cost of your requests will get reduced. You may use tools like Memcached and Redis for this purpose.

API wrappers are language-specific packages or containers that combine sets of API calls into user-friendly functions. The wrapper calls multiple API calls without the interaction of the user.

With HATEOAS, a client can interact with a REST API entirely through the responses provided dynamically by the server. This concept is like a

web-user browsing through web pages by clicking on hyperlinks to reach a destination.

Good error handling can make debugging easier by identifying whether the problem is a result of a client or server error. For some errors, the client can simply change the request, while for others they need to contact support. Some basic and helpful methods of error handling include:

Verifying the correctness of data is known as validation in APIs. There are two types of validation, client-side and server validation. Client-side validation is generally done by giving prompt feedback, for example highlighting the wrong entry in red or tooltip for correction, etc.

Server-side validation is a crucial component of API development. It includes some mundane tasks like validating whether a property is required or what kind of property it is (email, account number, etc) or if a property is not required in case another property is already there.

API testing is like software and QA testing. It includes testing APIs directly and as a part of integration testing to determine if they meet expectations for functionality, reliability, performance, and security. Postman, SoapUI, and JMeter are some of the popular tools used for API testing.

API documentation is a technical document that contains detailed information about the ways to effectively utilize and integrate with it. Generally, it covers details about the functions, classes, returns types, arguments, etc.

You should aim at creating intuitively consistent API. Reuse the same naming conventions throughout. Developers should be able to guess parts of your API even without reading the documentation. Maintenance of old versions of APIs is also important.

Anticipating all possible ways in which users will want to use your API is not possible. Every client platform is also not consistent. Considering these future unknown scenarios, its good to have some degree of tolerance with your input and output constraints.

As an API provider, you need to keep it secure but not difficult to use. If a user must write code or spend more than five minutes for authentication, it is not even close to being user-friendly. Token-based authentication is one of the preferred ways of authentication.

Finally, keep it simple and make sure people can use your API and it works the first time and every time.