Android vs iOS - Which mobile platform is better in 2020?

Android vs iOS: Which mobile platform is best for app development? 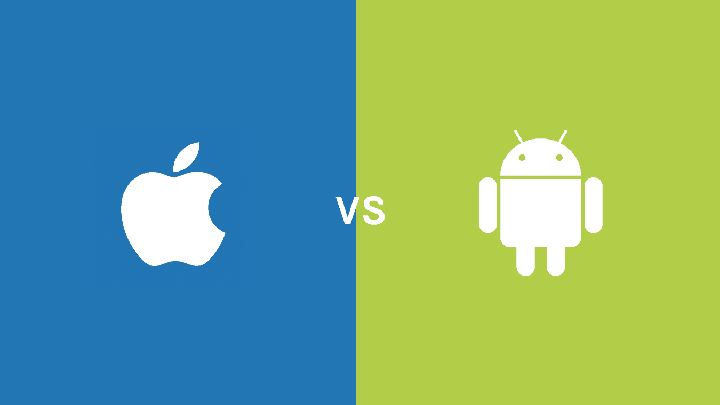 When it comes to developing an app, how do you choose between Android and iOS? On the face of it, with Google’s Android holding around 88% of the market share as per Statista from the second quarter of 2018, it might seem like the better choice, but can you ignore the high monetization prospects that Apple’s iOS platform offers? Of course, the simple solution would be to develop for both platforms simultaneously, but not every company has a budget for that.

Therefore, which platform should you choose for your app development? It’s a common question many of our clients ask us when they approach us for developing an app. The fact is that both platforms have their fair share of pros and cons and being aware of these makes it easier to decide which one is better suited to your requirements. In this article, we outline the key differences between Android vs iOS to help you get a clear idea about which one to choose.

Market share of units sold: In terms of market share, Android has been the leading platform worldwide since 2016. In 2018, 217.72 million iOS smartphones were sold by Apple. In comparison, as per Gartner statistics, Android sold 1.3 billion units in 2017.

Market share of apps: Google Play Store had 2.6 million apps available for download as per Statista figures of December 2018, whereas the Apple App Store held the second position with around 2 million apps.

App downloads: In 2018, as per App Annie, the total number of downloads on the iOS and Google Play stores were 28.4 billion. Google Play downloads accounted for over 20 billion downloads during this period.

Average app revenues: When it comes to app revenue, the difference between Android and iOS is the larger reach of the former versus the more lucrative earnings from the latter. In the 3rd quarter of 2019, Apple’s iOS apps generated $14.2 billion, whereas Android apps earned $7.7 billion through the Google Play Store.

As per data published by Marketing Charts in 2018, although the average mobile app revenue on iOS and Android differ slightly depending on the type of app, iOS apps earned more per user across app categories. For gaming apps, the average mobile app revenue per user was $1.99 for iOS vs $1.56 for Android. When it came to shopping apps, iOS earned $19.64 per user compared to $11.49 by Android, and for travel apps, iOS was a clear winner with $32.29 per user versus $20.47 for Android.

Development complexity: App development for iOS is less complex compared to Android, mainly because Apple has a fewer number of devices – iPhone, iPad, and iPod. One of the main issues with Android app development is that of fragmentation as there are many types of devices, smartphones, and tablets, besides differences in screen sizes, aspect ratios, and operating systems.

Development Cost: The difference in cost is not easy to estimate since one needs to consider not only the time that is taken to develop the app but also the hardware used for the process. While Android apps might have a higher cost due to the longer development time, the Android Studio application that is used for app development can be installed on a standard PC.

iOS apps are developed using Xcode, which works only on the Mac. Therefore, the investment in buying a Mac as well as an iPhone or iPad can significantly add to the cost of development.

Publishing process: Although iOS apps are quicker to design, Apple has a lengthy and strict approval process before an app can be published to the store. Android apps can be uploaded relatively easily on the Google Play Store by paying a one-time fee of $25. Updates and modifications to the app store take longer on iOS as every change needs to go through the long and stringent approval process. On Android, once published, the app is available on the store within a few hours, and one can perform beta testing or update the app easily and quickly.

Android vs iOS - Difference and Comparison

Pros and Cons - Android vs iOS

What should I choose – Android vs iOS?

In the end, choosing the right platform depends on a variety of factors such as time to market, budget and the scope of the app. Should you opt for Android app development that gives you access to a wider audience but at a lower average revenue per user or and iOS app that has greater prospects for earning revenue? Will iOS app development give you the advantage of a reduced time to market compared to an Android app? While the details in this article will help to answer these questions, there’s no definite response as to which one is better.

TechAhead, a top app development company, has experience in developing hundreds of apps for both iOS and Android. Our experienced tech consultants can help you make the right decision between Android vs. iOS after evaluating the project objectives, the scope of the app as well as the budget available for the app development.

Which operating system is superior – iOS vs Android?

Is it easier to develop an app for iOS or Android?

However, an often-overlooked factor in the development process is publishing the app on the store. Apple’s strict controls mean that a longer time is spent waiting for the app to be approved, whereas Android apps can be uploaded quite easily on the Google Play Store after a one-time payment.

Which is cheaper – Android vs iOS app development?

The app development cost depends on several factors, including the time, resources and hardware used in the process. While iOS apps take less time to develop, they require a significant investment in hardware as the development and testing can be done only on the Mac, iPhone or iPad, which are more expensive than the regular PC as well as the more affordable range of Android phones.