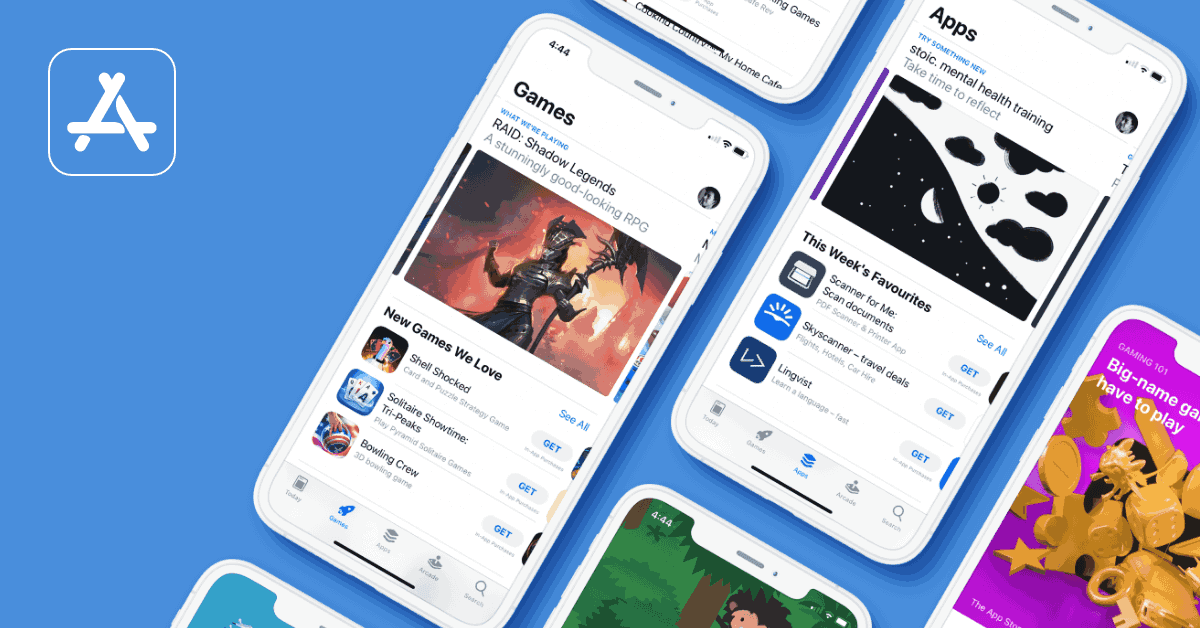 As per the latest report, Apple hits 1.5 billion active devices in use worldwide. With each passing year, these numbers are growing at a remarkable speed. With amplifying numbers of iPhones, the demand for iPhone apps is also increasing. Research shows that there has been an extensive increase in the average time that a U.S. consumer spends on the mobile phone.

The study states that the average American spends about 3 hours and 43 minutes a day on their smart device. Moreover, the average user checks their smartphone for about 80 times a day. Indeed, users spend most of the time downloading and exploring apps in different categories, including gaming, lifestyle, entertainment, sports, business, news, travel, productivity, finance, etc.

The article includes some important Apple App Store statistics that both- iPhone users and iOS developers must know.

1. Total Number of Available Apps on the Apple App Store?

In 2019, the Apple App Store offered 3.06 million non-gaming apps in comparison to 903,489 gaming apps. As of May 2019, gaming tops the chart of the most popular app category with about 25% gaming apps, followed by business apps, education apps, and then lifestyle apps. 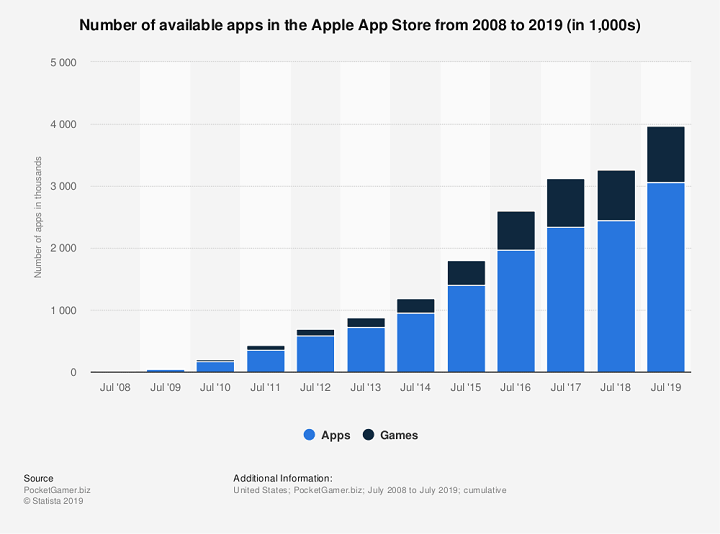 2. The number of Daily Apps Releases Worldwide on the Apple App Store?

The average count of new apps released daily (worldwide) on the Apple App Store is 1236.

On the basis of a number of app downloads from the Apple App Store, some of the most popular app categories are: 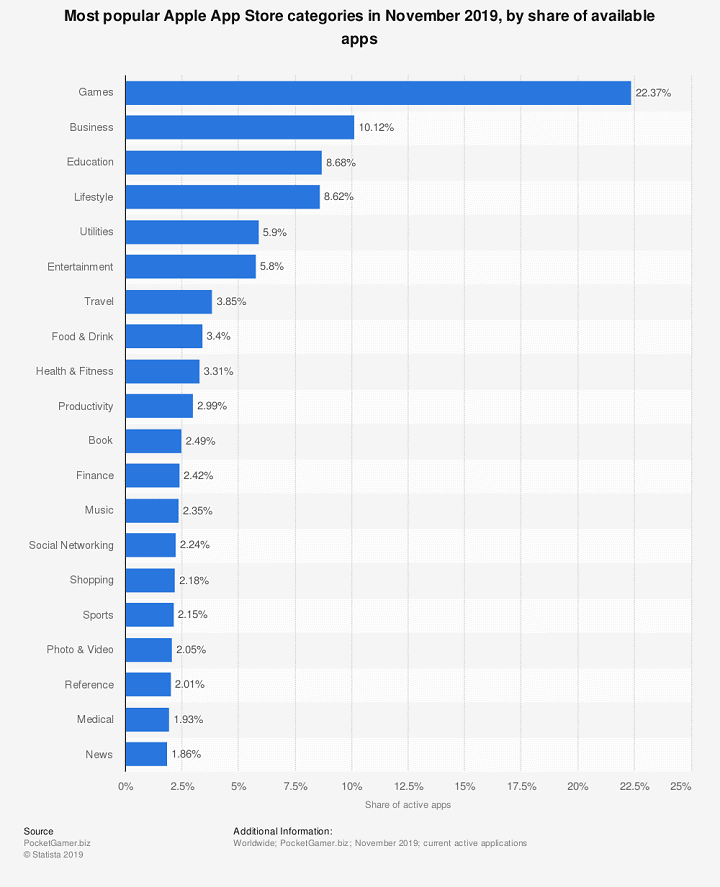 6. Total Number of Apps with and without Rating on the App Store?

Though the total number of apps with customer ratings is quite hard to calculate, Statista report states that around 24% of overall apps on Apple App Store enjoys a customer rating of 4.5 or higher out of 5 stars, whereas 2% of apps had 0.5 to 1-star customer rating. The App Store has 384,110 apps with ratings and 1,414,717 without ratings.

8. Total Types of Business Model on the Apple App Store?

Free Model: Users do not have to pay to download or even use the app. It’s available free of cost.

Paid Model: Users pay a one-time fee to download and use the app. In this model, users are allowed unrestricted access to the premium features of the app.

Paymium Model: This model is, in fact, a combination of freemium and paid models. Users pay for downloading the app from the Apple app store and are offered an option to purchase additional features, services, and content of the app for gaining access to extensive functionality. 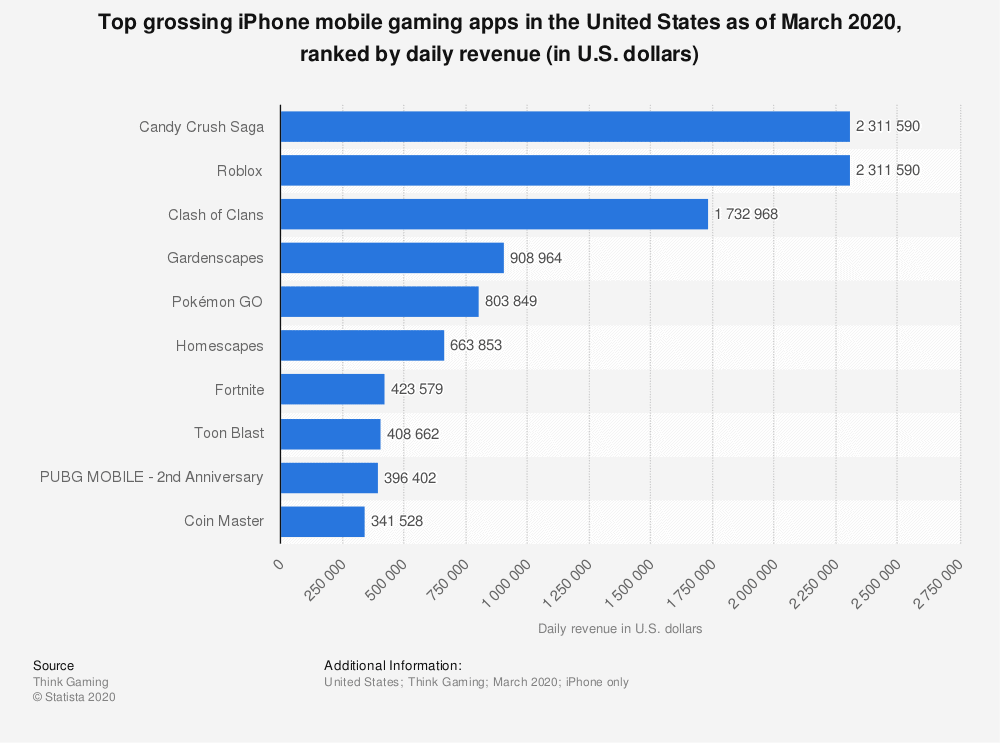 As of December 2019, the average price of paid iOS apps in the Apple App Store is below USD 10.

The Apple Apps Store U.S. gross revenue is estimated to reach 54.2 billion USD in the fourth quarter of 2019. This revenue comes from subscriptions, in-app purchases, and the premium apps existing in the Apple app store.

By the end of 2019, Gaming apps were ranked top download category with 2.33 billion app downloads worldwide. The second most popular category by download volume is the photo and video apps, with 586 million downloads.

As of November 2019, the games category share of total active apps in the Apple App Store has amounted to 22.37%. 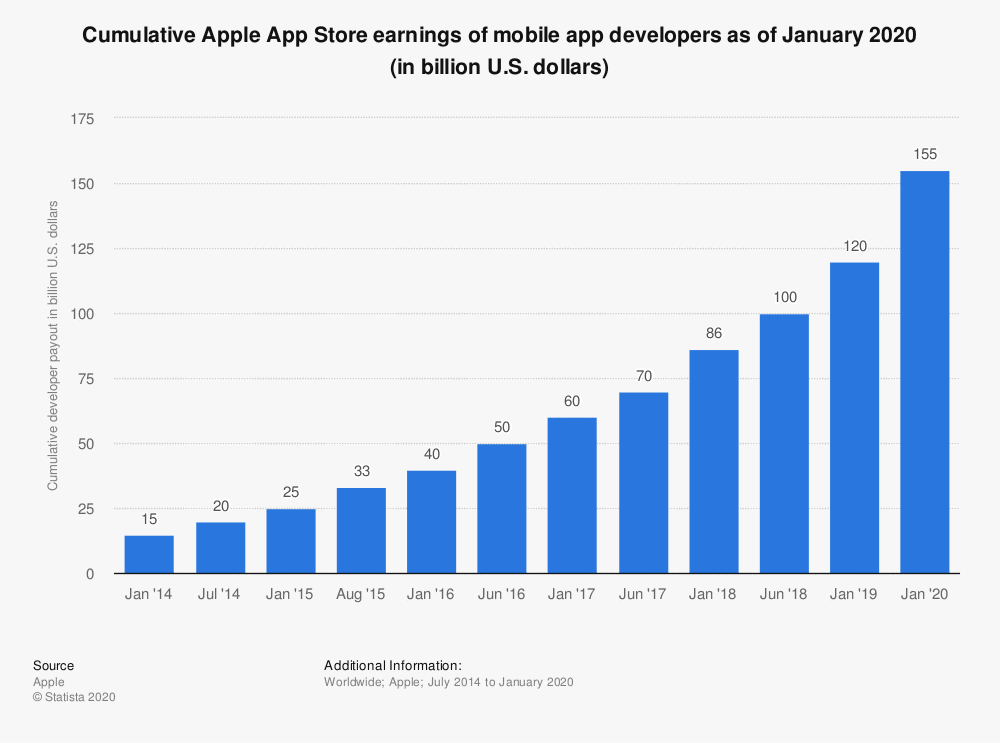 The cumulative Apple App Store earnings of iOS developers as of January 2020 estimates to USD 155 billion.

To sum up, the Apple App Store is flourishing with responsive apps in different categories. Gaming apps are ruling the App Store, and iPhone users are offered with quite a good number of games and entertainment options. Undeniably, the Apple App store is going strong, and the statistics here revealed a lot about iPhone app development and the changes it brings in business revenue.

For making an iOS app successful, it is vital to develop customized, responsive, and feature-rich apps considering the business-specific needs of the client.