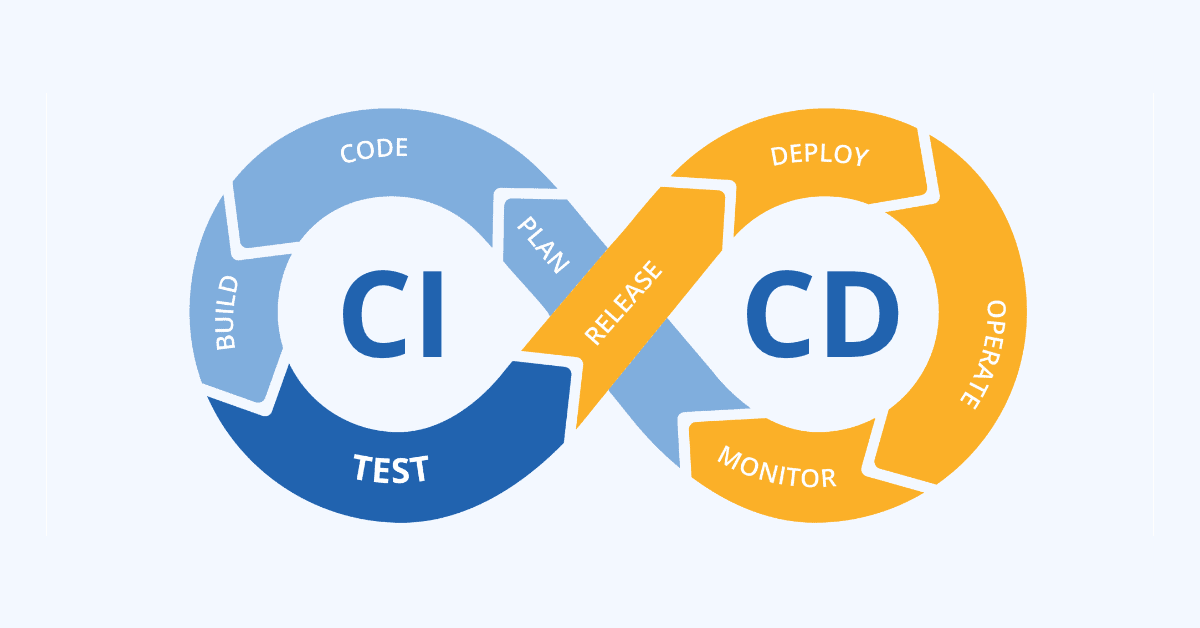 Continuous Integration (CI) and Continuous Delivery (CD) can significantly contribute to making the app development process more efficient. Research on companies using CI and CD points towards time-saving of as much as 20%, which in turn cuts costs of development. It’s the reason that IT decision-makers are using it or recommending its use for their organizations.

What are CI and CD?

The process of Continuous Integration (CI) involves the build copies being merged daily or several times a day into a shared code repository. Every integration is then verified using an automated process that checks for errors and identifies the root of the problem that requires rectification as soon as possible so that the development process stays on track.

Continuous Delivery (CD) refers to the process of regular delivery of the integrated code to production. It ensures that builds are ready for deployment or release in a single click.

What are the different stages of CI/CD in the app development process?

In most cases, CI/CD takes place through a seven-stage process:

Coding: The process of writing code is the backbone of any app development process. It commences at the development stage and carries through to the application maintenance phase. In the CI/CD process, code is written for the integration components in preparation for the automated steps that follow.

Building: The build stage involves multiple developers creating the app every day and adding their completed work several times a day to the CI application.

Packaging: After the performance and quality, testing is carried out, the app is ready to be deployed or released at this stage, whether it is a new app or an updated version of an existing app.

Release: The new URL for the app will be applied to various devices as part of the release in the CI/CD process.

Configuration: At this stage, the app infrastructure would be configured by formatting the coding and management tools to provide people with regular access to the CI platform.

Monitoring: After the app is released, continuous monitoring is essential for analyzing its performance. Any new code that is written by the developers for improving the app’s performance also goes through the CI process to reduce the chances of any bugs or problems affecting the performance halfway through the update.

What are the best CI/CD tools?

An open-source automation tool, Jenkins has a Java-based program with specific packages for different operating systems such as Windows, macOS, and Unix, among others. It comes with hundreds of plugins, and the server supports a centralized build and continuous integration, besides deployment and automation of software development projects.

CircleCI allows automation of the entire range of processes in the pipeline, from code building to testing and deployment. It supports rapid development and publishing as well as integration with BitBucket, GitHub, and GitHub Enterprise. It comes with the option of being cloud-managed or run on private infrastructure with a firewall.

This CI service offers building and testing solutions. New builds are pushed to a GitHub repository from where the tool automatically detects them and uses them to build the project and run tests. Travis CI offers support for several configurations and languages, including Java, Node, Perl, PHP, and Python. 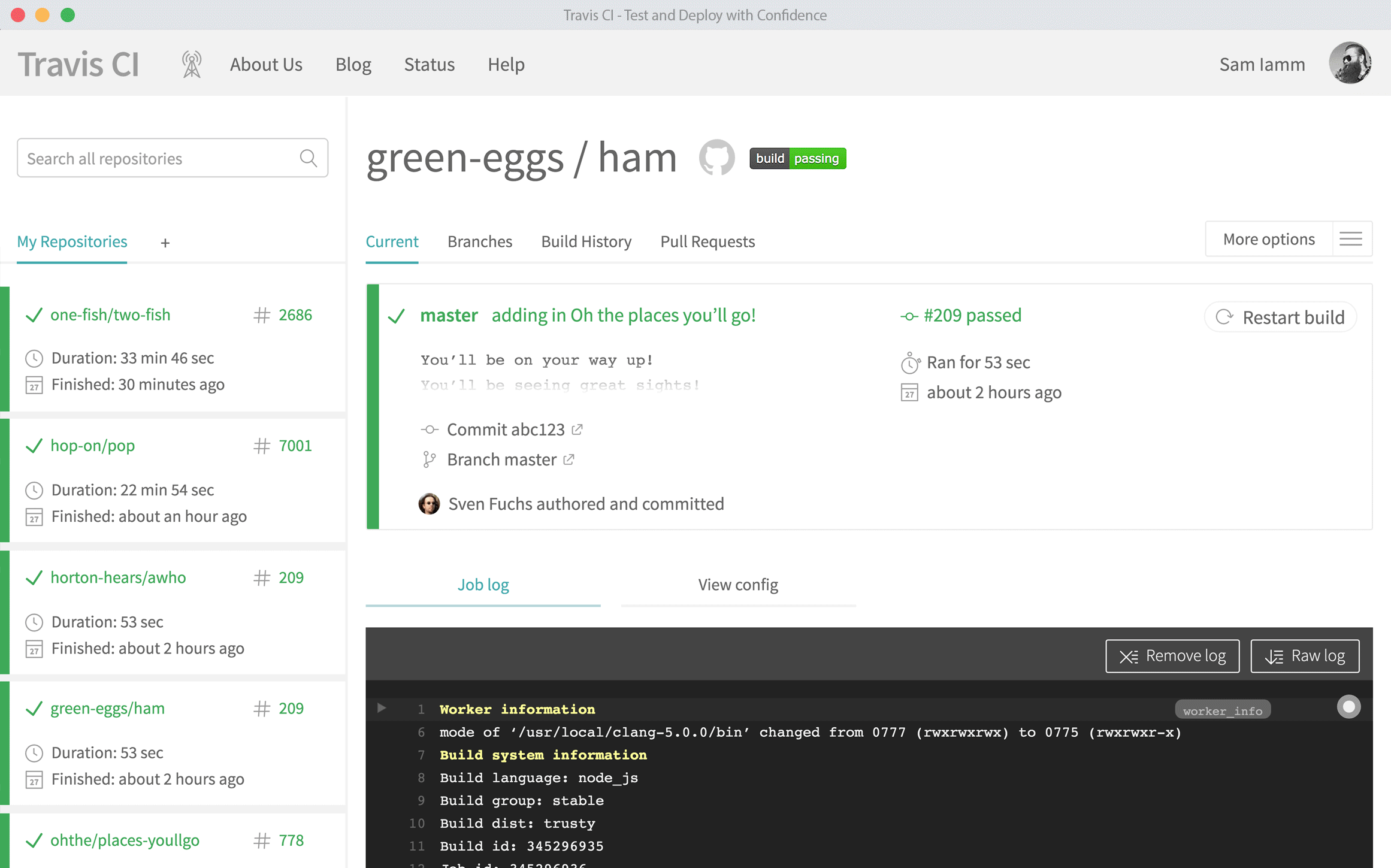 Bitrise is a CI service with a focus on mobile app development. The platform provides continuous integration and delivery, allowing developers to automate tests and deploy apps with just a few clicks.

Visual Studio App Center is a Microsoft backed tool that provides developers with the option to build, test, deploy, and monitor apps. The product facilitates the creation of an installable app package with every push made to the repository.

Fastlane is a CI tool for iOS that allows the automation of cumbersome tasks such as generating screenshots, managing provisioning profiles, and deploying builds.

Since CI and CD involve the integration of small pieces of code each time, it is easier to test the code as opposed to handling a large volume of code at one shot in the normal development process. Continuous testing is carried out as soon as the small pieces of code are added to the repository, and problems are identified after each addition, allowing developers to rectify the issues early. CI/CD is especially useful in scenarios where continuous communication between the team members is challenging, whether it is a team working remotely or a large-sized in-house team.

Limiting the scope of the negative outcomes arising from an error not only reduces the risk of damage but also allows easier maintenance of systems. CI/CD makes fault isolation quickly detectable and easier to implement. Since it includes continuous monitoring, fault identification, and triggering its location, the scope of bugs in the application is limited. Moreover, it can guard against sudden breakdowns and other significant issues since the fault is isolated before it can affect the entire system.

MTTR measures the time taken to fix an issue or recover from a failure. CI/CD reduces the average time taken to repair or rectify a feature since code changes are much smaller and fault isolations are detected more easily.

Since smaller pieces are tested, and only specific changes added to the system, testing can be carried out more accurately. The continuous merging and releasing of products and features results in continuous testing that improves reliability and improves quality.

Since bugs or issues are detected and repaired faster, releases can take place much quicker and more frequently. CI/CD involves the continuous merging of codes, their testing and deployment to production, thereby ensuring that the code is in a release-ready state.

With CI/CD, the whole team is aware of the progress of the build, including the details of the latest test results. Accordingly, they can plan their work better by having a clear picture of the changes that cause the build to break more frequently, allowing them to work around those changes.

The automation in testing and deployment in CI/CD not only makes the workflow smoother for developers but also cuts costs significantly. Since the process involves automated testing of smaller pieces, issues are detected early enough to be rectified without waiting until the end.

The continuous testing helps to detect issues at every stage, whether it is in the early stages of the build or for updates to an existing app. With CI/CD, bugs can be fixed promptly based on the feedback, making maintenance and updates easy.

How CI/CD help to save time

Once the code is added to the repository, the developer can continue working while the testing takes place in the background. The delays in shipping the build, which would typically take around 15-20 minutes, can be avoided entirely, thereby saving time and improving the developers’ productivity.

While the set up of a CI/CD pipeline can take time as it involves the configuration of workflows as well as the integration of processes and features, once it is in place, it does not require any further time being spent by a human on set up or maintenance.

Since the whole team is aware of what is going on at every stage, CI/CD facilitates better communication. If a build fails, every member of the team is notified of the issue so that they can work to identify the cause and make corrections.

With Continuous Delivery, there is no need to spend time on deploying the app to the store as the tool automatically ships the new version to the preferred app store.

Usually, updating and maintaining servers takes up a significant amount of time and money. CI/CD tools take care of maintaining the build servers, helping to free up time.

Points to consider before choosing the best CI/CD tools

Before incorporating CI/CD, it is essential to decide on the best tool to suit the organization’s requirements.

While a self-hosted CI/CD service requires time and resources allocated to its set up, configuration, and maintenance, cloud-based services take away the hassle of maintaining build infrastructure. If the organization does not have the resources for self-hosted services, then it is advisable to opt for a Software as a Service solution.

It is crucial to choose a tool that is easy to set up as the successful adoption of CI/CD requires involving everyone in the organization. A solution that takes time to set up might work against that goal.

Why choose TechAhead for CI/CD?

With the experience of over a decade in mobile application development, TechAhead is the perfect partner for your CI/CD integration. Our team has expertise in open-source as well as proprietary CI/CD tools. Reach out to us to ensure a smooth transition to a self-hosted or cloud-based solution that helps your organization improve productivity and save costs.