Facial Recognition: leverage the power of tech in your industry

Facial Recognition: leverage the power of tech in your industry

It is expected to grow to $7 billion in revenue by 2024. It’s expected to grow at a compound annual growth rate of 16% from 2019 through 2024. The top 3 categories that are the leading consumers of facial recognition are Security (law enforcement), health and marketing and retail. 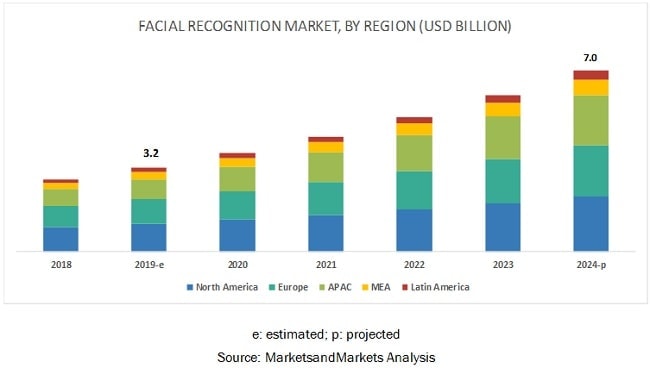 Companies and governments across the world have adopted facial recognition, among which USA, China and are the leading adopters. Technology companies such as Google and Facebook have invested heavily, furthering their development. Both use this for their respective photo-based apps.

Both Facebook and Google have reached accurate face detection levels of 97.35% and 99.63% respectively. With tech to support it, facial recognition has tremendous opportunities in the fields of Emotion Recognition, Attendance Tracking, and Monitoring, Access Control, Behavioural Analysis, Crime and more.

The surge in the Artificial Intelligence development and Machine Learning (ML) space has propelled the growth of facial recognition as key players plan to integrate Artificial Intelligence (AI) and the IoT application development with facial recognition systems. North America holds a significant market share while Europe and the Asia Pacific are expected to grow over the next 5 years.

How does facial recognition work?

You’re either good with faces or not. Well, that’s your memory doing the hard work for you. Let’s find out how facial recognition actually works. Facial recognition is a sophisticated system involving multiple steps, each specializing in a particular task as part of the process.

As a person’s face undergoes several changes during their lifetime, complex facial recognition systems consider multiple factors such as ageing, plastic surgery, cosmetics, effects of drug usage or smoking, pose, posture and image quality. All these factors contribute to the overall accuracy of the recognition technology. We can break this process into two logical steps:

The Pre-processing stage can be further categorized into:

This is the first step of facial recognition – to detect or identify if the given sample (image/video) has a face(s). It also tracks certain facial features or expressions for future use cases.

Facial recognition technology needs to combat the fact that our faces are not aligned or structured in any particular manner in a sample. The face might be blurred, partially covered with an object like a book, presenting a side profile, which makes detection even trickier. This is the objective of face alignment. It highlights the contouring facial lines and features for a face in the given sample.

This is the most critical piece of the puzzle. This is where the recognition technology reads the geometry of the face in the sample. It captures individual features such as the eyes, nose, lips, chin, the distance between the eyes, distance from the forehead to the chin and so on. The data is captured in a format that can create a unique facial signature and be consumed by algorithms to perform facial recognition.

Here the system compares the data extracted (mathematical formula of the face) in the previous stage to a known/given database of facial signatures to find a match. The output can be used in several ways, such as Facebook and Google who automatically identify and tag people in your photos.

How facial recognition is disrupting in various industries

Facial recognition has led to the upliftment of several sectors in the healthcare industry and improve overall patient care. It helped to:

It can be used to create driver profiles that could store information such as seat and steering position, vehicle speed, preferred music volume, and other such driving preferences. Ford and Intel have developed a product that only allows the owner and designated family members to start the car.

Security within the banking and finance industries is paramount. Banks such as HSBC, Chase, Bank of America and Apple’s FaceID use facial recognition tech to authenticate customers, log in to the mobile banking apps and perform various transactions.

Companies such as MasterCard have also experimented with this to allow customers to conduct transactions approved by their phone’s camera. CaixaBank, Spain is using a facial recognition system as a signature for ATM cash withdrawals to prevent fraud and eliminate the need for a PIN.

Tech giants such as Amazon and the company are developing facial recognition-driven law enforcement applications. These apps can be used to identify shoplifters and curb organized retail crime.

The Govt. of India issued an Aadhar card for every citizen of India. Agencies use the tech to identify fake passports as well. It’s a unified community for companies and governments to devise solutions to curb terrorism and cybercrime.

Airlines are using facial recognition to streamline customer experience with faster check-ins and baggage claims. JetBlue is experimenting with authenticating users via face detection instead of a boarding pass.

Facial recognition tech is a boon to the hospitality industry where hoteliers can personalize their customers’ user experience to suit their needs. Using the guest’s face, the hotel can authenticate its check-in, grant access to rooms and authorized lounges and provide suggestions and perks tailored to each customer.

Certain insurance companies are analyzing the face of applicants to provide insurance policy quotes. They take into certain consideration factors such as age, gender, weight, BMI, smoking-related issues and more.

Facebook launched DeepFace in 2014, determining if two faces belonged to the same person. It could detect facial recognition with an accuracy of 97.53%. Facebook uses face recognition auto-suggest people in the pictures you upload on the platform.

Snapchat uses heavy facial recognition that accurately detects your facial contours and features to precisely map the popular Snapchat filters on your face.

Google launched FaceNet in June 2015 which achieved an accuracy of 99.63%. Google uses two separate technologies for images and videos. Cloud Vision is for images and Video Intelligence is for video-based services.

Amazon Web Services has a power-packed facial recognition offering in Rekognition. Rekognition provides real-time analysis, extensive facial analysis, scene and activity detection and moderates unsafe content(nudity). Rekognition could identify as many as 100 people in an image.

Walmart has implemented a facial recognition system that can determine the mood of all customers during shopping and also measure customer satisfaction after visiting the supermarket.

Gemalto is one of the leaders in facial recognition tech and has specialized in the biometric technologies for 30 years. Gemalto’s Live Face Identification System (LFIS) can detect a face in a crowded, dynamic and unstable environment. 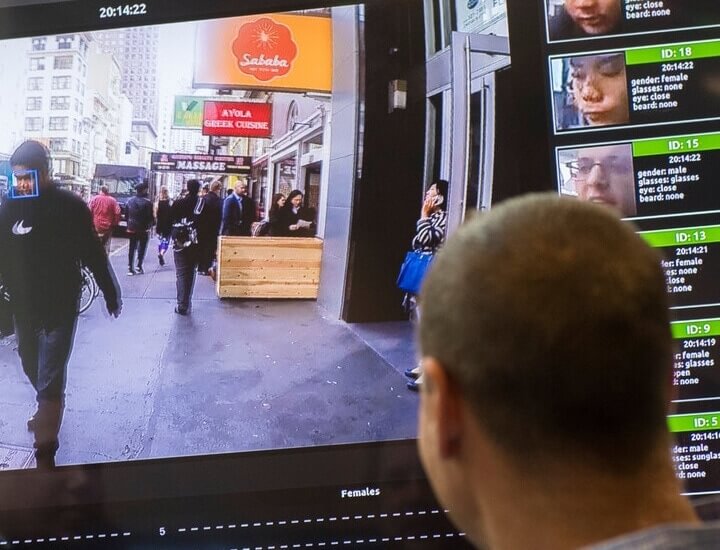 This is one of the major concerns which divides opinions. For example, a school in China monitors the attention level, mobile usage, etc. of their students.

Citizens often see a lack of government policies that explicitly govern the use, misuse, and improper conduct while implementing facial recognition technology.

People are also concerned with the accuracy of facial recognition and whether or not there are any biases. Misidentifying someone of a misdoing would lead to being wrongfully abused by law enforcement.

Once you’re in the database, there’s no coming back. You forfeit the right to who may end up having your profile.

There have been several factors that have contributed to the growth of facial recognition technology, Artificial Intelligence (AI), Machine Learning (ML) and the Internet of Things (IoT) being at its core. The increase of surveillance in the public sector and law enforcement has acted as a driving factor for facial recognition.

People have become tech-savvy (growing use of mobile phones) and vigilant, adding to increased demand for fraud detection and prevention systems.

Governments have also increased security measures for commercial and financial systems using facial recognition. The market for 3D facial recognition is up for grabs and key players who succeed in integrating Artificial Intelligence (AI) and Machine Learning (ML) with it will be at a clear advantage.

It’s not just about detecting and identifying a person’s face, it also depends on what you do with that information as the possibilities are endless to what you can do. So, get creative and implement facial recognition to suit your needs.

TechAhead, a leading app development company is known to deliver high quality mobile apps for all platforms and frameworks. Contact our experts now to take your business to the next level.

What is facial recognition?

Facial Recognition is a biometric software capable of identifying and solely verifying a person’s facial features by analyzing and comparing patterns based on an individual’s facial contours.

How does facial recognition work?

The facial recognition process generally works through defined steps that include:

Top companies that are using facial recognition technology are Microsoft, Apple, and Google.

Where is facial recognition used?

Facial recognition is used in several popular sectors that include: