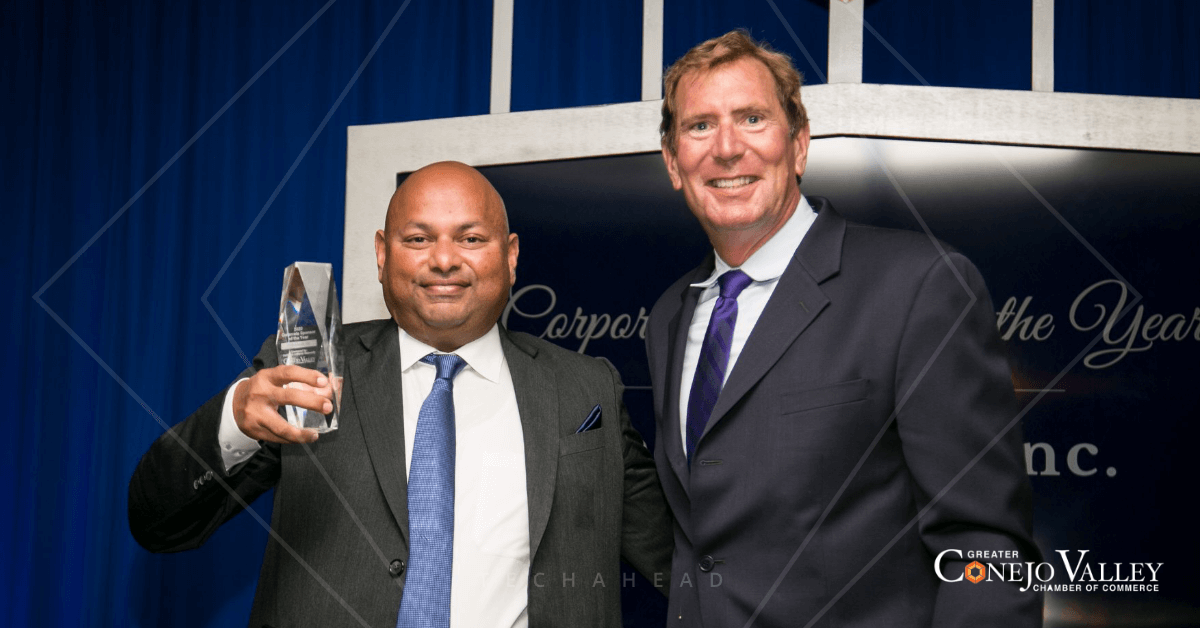 (Agoura Hills, CA) Local business owners and professionals have an admirable tradition of leveraging the success of their businesses to contribute to the community at large. Their contributions deserve to be honored and that is exactly what the 5-Star Accredited Greater Conejo Valley Chamber of Commerce does on an annual basis.

On March 6, the Chamber hosted the 2020 Blue Diamond Recognition Gala to honor a variety of businesses as well as individuals who have demonstrated a commitment not only to helping the community heal after headline-grabbing events but also a dedication to working quietly and behind the scenes.

Chief among the honorees was TechAhead, celebrated as Corporate Sponsor of the Year. “TechAhead’s contributions to the community during 2019 are truly impressive,” said Danielle Borja, President/CEO of the Greater Conejo Valley Chamber of Commerce. “TechAhead is not only a Gold Member of our Chairman’s Club but they also generously helped the Little Angels Project develop an app that will assist with animal evacuations during future wildfires. That’s the kind of innovative outreach that we like to recognize and celebrate.”

“Speaking on behalf of our team at TechAhead,” said Vikas Kaushik, TechAhead’s CEO, “we’re honored to be in the company of such an impressive group of people.”

The list of honorees was indeed distinguished. Woman of the Year Leanne Neilson, Provost and Vice President for Academic Affairs at California Lutheran University (CLU), has not only led several nonprofits such as United Way’s Women United in Ventura County but also with her husband donated $100,000 to establish an Emergency Support Scholarship Endowment at CLU. Man of the Year Scott Harris, co-owner of Mustang Marketing, has dedicated himself to mentoring hundreds of children in the community. Nonprofit of the Year Conejo Free Clinic is a highly respected institution, has provided free medical, legal and dental services to over 5,000 patients per year for over 30 years. The business of the Year Atara Biotherapeutics is paving the way in research for immunotherapy, which provides hope for those faced with cancer.

TechAhead is an industry-leading, top-rated mobile app development company that helps businesses thrive in the digital world. TechAhead’s industry and technology experts have decades of combined experience in mobile consulting, design and app development, as well as ongoing upgrades and maintenance, allowing them to specialize in creating digital form factors and mobile app experiences that are secure, scalable and intuitive enough to make life better.

TechAhead, established in 2009, has been recognized as one of the top 100 Asian startups by Red Herring, and — for the second year in a row — as one of the top 10 Global Mobile Development Companies by Clutch, an independent US-based research company. With offices in southern California and New Delhi, India, TechAhead boasts a strong, smart and dedicated team of over 150 mobile mavericks.