Why Use Golang for Enterprise Mobile Application Development?

Why use Golang for enterprise mobile application development?

Golang, also known as Go, is an open-source compiled programming language that is statistically typed. It was open-sourced by Google in the year 2009 and was designed by Robert Griesemer, Rob Pike and Ken Thompson around 2007.  Go is syntactically similar to C and it made its first stable release in 2011. However, as additions to C, Go offers garbage collection, safety to memory, structural typing and CSP-Style concurrency.

As per TIOBE Index for Go, Go has been the biggest mover over the past year with "hardly any competition", gaining 2.16 percent in popularity and rising from 54th position in January 2016 to 13th in January 2017. 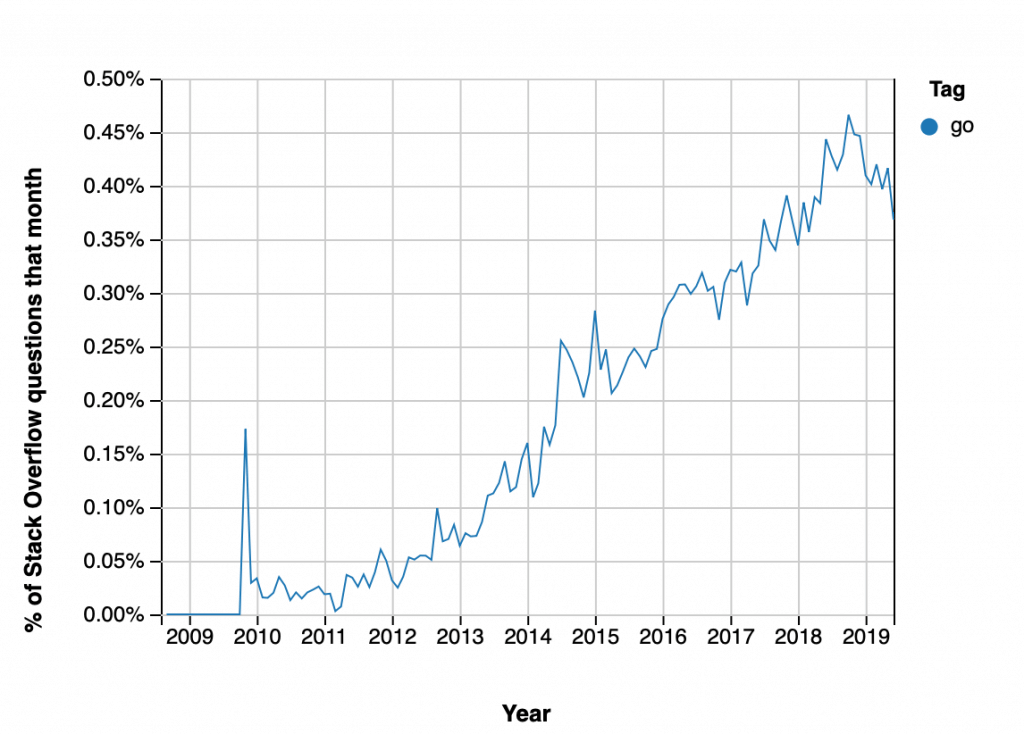 According to Rob Pike, one of the co-creators of Go:

Despite it being created by Google, it provides the platform for anyone to contribute to it by creating new proposals, making it faster, fixing existing bugs. Github hosts the Go language’s source code.  The language isn’t proprietary and certain or all provisions can be made depending on the public.

Top Reasons to Choose Golang for Your Project

As discussed above, GoLang is an open-sourced language, meaning it isn’t proprietary and anyone can contribute to it.

GoLang’s syntax is small as compared to other languages hence making it easy to learn. The language is easy to understand can fit in your head, and you do not need to spend time looking it up. It’s so clean and easy-to-read and that even non-GoLang programmers, those familiar with C can read and understand a Go program easily.

GoLang’s concurrency model and small syntax make it a really fast language. Since GoLang is compiled to machine code, it outperforms languages that are interpreted or have virtual runtimes. The compilation of Go programs is also extremely fast. Go also links all the dependency libraries into one binary file hence eliminating the dependency on servers.

Since the language has built-in concurrency, there are no heavy threads instead there are channels. Go’s concurrent programming is easier than any other language available. It has ‘goroutine’, a lightweight thread that is communicated via a ‘channel’.

Go is a cross-platform app development language. One can easily write code in any environment - OS-X, Linux, or Windows. So code written in windows can be compiled and built in a Linux environment. The major work is done by passing in two variables when running the go build command: GOARCH and GOOS.

6. Explicit Designing For The Cloud

Since apps today are designed to be cloud-native, it is essential for programming languages to be designed keeping the cloud in mind. GoLang is explicitly designed to keep these requirements in mind. Written especially for the cloud, this is another reason for the reason for its growth and popularity.

Since Go is statically and strongly typed, it means that you need to be explicit in the type of data you are passing and it also means that compiler knows the type of every variable respectively. The fact that garbage is collected also means that it cleans up and helps integrates the whole collection into an executable binary. Therefore making the entire framework, more secure.

Go has a wide range of built-in frameworks, which essentially means it is a library that provides support for a wide variety of activities and services.

While Go runs on the same syntax as C, it is a more modern and fast language. Golang has built-in support for multi-core networked distributed applications etc.

Go has been designed, keeping fast compilation in mind, since the start. The language is easy to read, it’s concise and explicit and it compiles directly to the machine code.

As mentioned above, it language collects your garbage on your behalf and then integrates the whole garbage collected into an executable binary.

Golang boasts of a standard library, that is full of features that don’t need third-party support. It provides brilliant built-in functions especially for working with primitive types. It has packages for easily standing up a web server, handle I/O, cryptography, etc.

Golang is fantastically suited for scalability because of its coroutines which it calls “goroutines”. Goroutines allow multiple lightweight threads to be performed simultaneously, communicating to channels, with parallel tasks executed easily and reliably.

Go, despite being a comparatively new programming language, has almost half a million programmers in its community. However, the community has been called difficult since it shows a lack of interest in suggestions. The community also isn't very open to web frameworks.

The Future of Go Language

Go Language is being called the future and the fact that it is developed by Google has a role to play in it. Google is known to create products that focus on maximum efficiency and are user-friendly. The modern and young language is powerful and has already ensured popularity and excitement from the community.

With Goroutines, Golang was able to take competitive programming to another level altogether. Since Go was designed to create highly-loaded systems, companies are already migrating to Golang from other languages and hence, we know, Golang is the future. Additionally, because it has come out of Google, the company will ensure regular financing and updates.

Golang is a brilliant alternative for C or C++. The fact that it is still young implies that it is changing and updating everyday and hence adding frameworks etc. It has become the preferred language for most software developers and programmers and top enterprise companies as well, for their enterprise app development company. Go is a powerful language and its aspects such as garbage collection, goroutines, are a hit. The Go community if a huge plus for the language and the documentation is constantly improving with new open-sourced libraries cropping up.

Like we said before, GoLang is definitely the future.