Blockchain for Aviation Industry: Fasten Seatbelts for the Take Off

As a technology, Blockchain is still in its infancy. However, with its ability to provide a more decentralized, secure and stable environment where business and commercial transactions are more reliable and transparent, blockchain has the potential to disrupt processes in several industries, including aviation. Some airlines are already exploring the application of blockchain in various areas such as customer service, repair and maintenance of aircraft, ground operations and revenue to improve overall performance.

Currently, the aviation sector operates with archaic systems and processes, including some that were inherited in the 1970s. It doesn’t facilitate the much-needed swift and seamless exchange of data between the various players of the industry’s complicated ecosystem. With its decentralized system for management of data, information exchange and security, blockchain can completely transform the current processes in the industry.

Among the features of blockchain that is getting a lot of attention from the aviation sector are smart contracts, which can self-execute based on predefined rules. They can be used to handle a wide range of repetitive processes such as billing between different airlines as well as travel agents, loyalty points or rewards settlement, travel insurance purchase, and payments such as airport fees, taxes and other charges payable to the airport authorities.

Similarly, smart contracts can be employed across other processes such as customer experience management, simplification of revenue accounting and payment reconciliation, tracking of aircraft components, baggage or shipments, reducing dependency on intermediaries by providing customers direct access to ticketing and other airline offers, among other things.

How will Blockchain help the Aviation Industry? 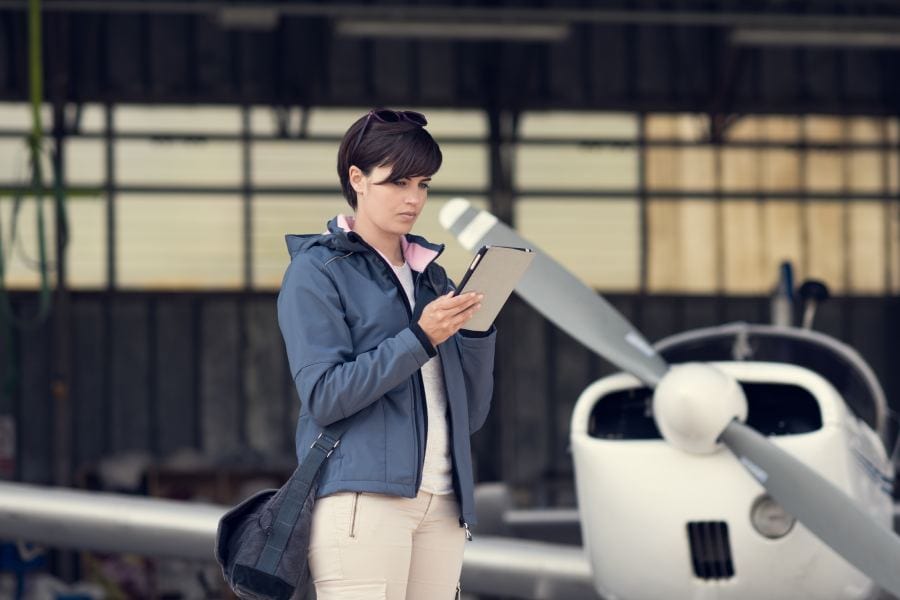 The main reason for blockchain’s popularity among the airline industry is its capability of storing information on a shared digital ledger that can be used by MRO and OEM teams for storing information related to the maintenance status of aircrafts, flight schedules and other data. For instance, blockchain can be used for registration of details such as the date of manufacture, serial number, inventory of spare parts of a specific component and other information that the technical team can easily access during repair and maintenance. As a result, every person in the network has easy access to information required to simplify processes, which is the primary benefit that blockchain can bring to the aviation industry.

Blockchain Technology Use Cases in the Aviation Industry

In the airline sector, forging identities of individuals comes with serious threats, including the possibility of terrorist activity at airports or on flights. Blockchain can use biometrics to validate identities. Furthermore, once it is validated, the identity is stored on the blockchain where it cannot be altered in any way due to the decentralized and secure network. Besides reducing human errors that occur during the process of checking identity documents, in the long term, blockchain could potentially result in biometric identification replacing paper passports.

All airlines companies face inefficiencies caused by fragmentation costs. They arise due to cost differences from additional features such as upgrades and premium services as well as from customers using different services or operators to save money. Blockchain technology presents an opportunity to streamline these cost efficiencies by providing a unified system that airlines, travel agents and other players in the industry can use for booking an entire trip. It would include not only factors such as loyalty programs that affect the cost of a trip but also non-airline related services such as transportation and hotel accommodation.

Legacy ticketing systems come with the risk of errors during the issue of the ticket as well as from system failures. Blockchain supported smart tickets are still a theoretical concept. However, they can use smart contracts to create a paperless ticket that includes built-in stipulations for additional criteria such as lounge access, first-class or business class privileges and other services. Since the tickets will be stored on the ledger, it eliminates the risk of chaos caused by events such as system crashes. Moreover, it can combine elements such as biometric identification to eliminate the need for customers to carry digital or paper tickets and identity documents.

Events such as Aeroplane crashes or flight disappearance (like that of Flight 370 of Malaysian Airlines in 2014) are dependent on flight records for determining the cause of the accident or for tracking the path of the aircraft to find the wreckage or initiate search and rescue operations.  Blockchain can help to collect and store all the data related to a specific flight, whether it is the manifests, flight path, baggage onboarding or other factors. The data can be used for tasks of varying importance, whether it’s to track down the location of lost baggage or details such as the names of passengers on board the flight and their seat numbers. Since the information is stored securely on a centralized ledger in a remote location, there will be no danger of it going missing.

Delays are frequent during air travel, and they add to the overall costs due to passenger compensation expenses, hangar costs and other overheads. In most cases, unforeseen maintenance is the primary cause of such delays. Several leading companies in the airline industry are already exploring the use of blockchain’s distributed ledger to make aircraft maintenance more transparent than it is. The technology can be used to track the fitness of individual parts of the aircraft by monitoring data such as date of manufacture, depreciation and other maintenance-related features to gauge when a part needs replacement, thereby reducing delays.

Since empty seats result in a loss of revenue, airlines follow the practice of overbooking flights as a backup against last-minute cancellations, passengers arriving late for the flight and other reasons that could cause them to fly under capacity. The outcome can be chaotic when the overbooked passengers are forced off flights or refused boarding, resulting in bad press for the airline. By using blockchain-based features such as tokenized ticketing and smart contracts, airlines can manage the overbooking in a better manner to ensure that none of the parties suffers.

Currently, there are three major airline alliances worldwide, which calls for an efficient revenue-sharing model. While the alliance offers passengers the option of many connections, the algorithms used for revenue sharing are not reliable, resulting in inter-airline disputes and delayed flights. Blockchain presents the opportunity to create a unified system that uses predetermined criteria to share revenue immediately, thereby reducing overall costs and ensuring that flights are not delayed due to revenue sharing disputes.

While frequent flyer programs are aimed at capitalizing on customer loyalty, the loyalty programs of airlines vary significantly and have a lot of scope for improvement in terms of incentivization of customers. Blockchain can make it simple to merge the loyalty programs of individual airlines within an alliance, thereby providing customers with many more options for redeeming their accrued miles. Additionally, aspects such as revenue sharing, loyalty point redemption and accrual of points can be managed seamlessly with blockchain.

Recognizing the disruptive potential of blockchain, IATA has undertaken several initiatives using the technology. These include:

The initial research and development of cryptocurrencies in 2014 have shifted focus to developing the IATA Coin, a supranational digital currency for the aviation industry. In particular, the project will employ blockchain technology in the IATA Clearing House. The 2018 pilot project will be expanded to cover more airlines and currencies as well as the use of smart contracts.

The idea behind the Digital Certification Authority is to allow more efficient management of digital IDs in the commercial aviation sector. Its scope will extend to identity management of entities, validation of the integrity of content and certification verification.

This initiative is focused on using blockchain to reduce costs and inefficiencies associated with operational back offices of airlines. Smart contracts will be employed to simplify the procurement and payment processes between the airlines and their suppliers, including airport service providers, airport authorities and ground handling teams.

The concept of the Travel Grid is to create a common platform for facilitating a smooth, fast and efficient environment with blockchain capabilities that can benefit the aviation industry. The vision is to create an infrastructure that facilitates digital identity management, real-time digital interactions, simplification of processes and more to reduce cost inefficiencies and provide a seamless experience to passengers.

How Blockchain Technology Can Solve IoT’s Security Problem
Blockchain to Revolutionize Your Supply Chain Management
How Will Blockchain Impact the Entertainment Industry? 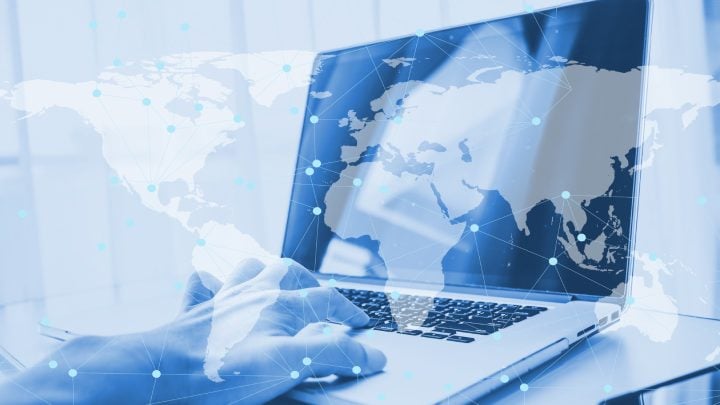 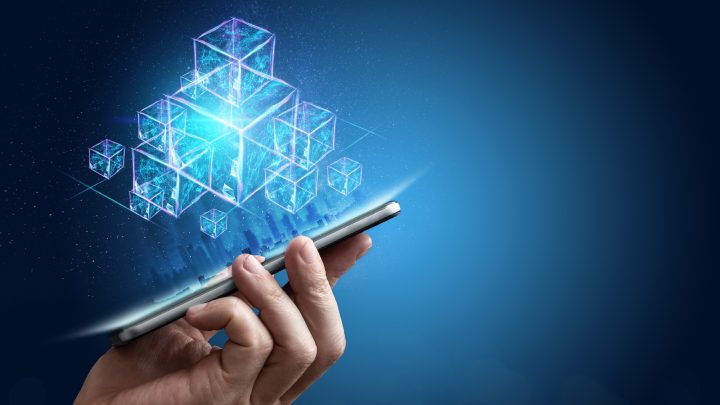