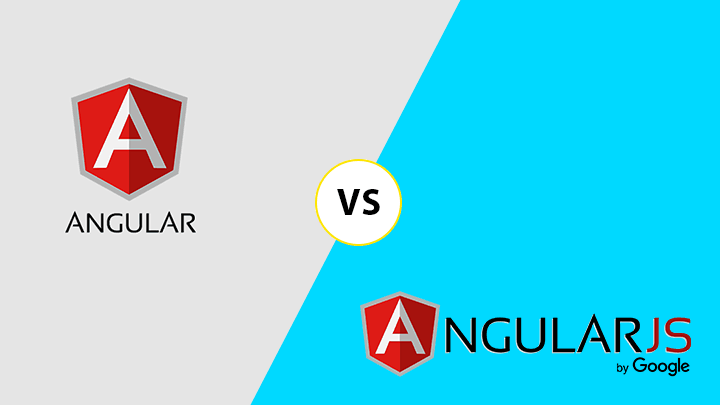 AngularJS is an open-source JavaScript framework from Google for developing front end applications. Its subsequent versions were numbered Angular 2 and onward. Being part of the JavaScript ecosystem, AngularJS struck a chord with web developers immediately. It was the first framework that enabled the development of interactive websites. It led to the development of single-page applications that were highly responsive and had an excellent user interface.

According to the StackOverflow Developer Survey 2018, Angular is the second most frequently used technology in the Frameworks, Libraries, and Other Technologies. Here Angular includes both AngularJS and Angular. 36.9% of the engineers surveyed accepted using AngularJS or Angular 2+ to create impressive user interfaces.

However, the same survey also had 46% of respondents saying that Angular was one of the most dreaded frameworks. In this blog, we will look at the Angular vs AngularJS debate that has been dividing the developer community since the release of Angular 2 in 2016.

Whether you are a software engineer looking to diversify into a web development domain or a business looking to expand its footprints through the launch of applications, the AngularJS vs Angular debate must be of interest. Without further ado, let us dive into it.

Google released AngularJS or Angular 1 in 2010. It garnered immediate popularity and support because now the static HTML pages could be turned interactive using AngularJS. However, soon, other frameworks were released, which began highlighting the drawbacks of the AngularJS framework.

Owing to stiff competition from ReactJS and VueJS, Google went for a complete rewrite from Angular 1 to Angular 2 using TypeScript as the new language. The decision to shift from JavaScript to TypeScript was to avoid the pitfalls of JavaScript and introduce a small amount of static typing, a feature that many existing web developers were demanding.

After Angular 2, Angular 4, 5, 6, and 7 have made their appearances. Of these, Angular 4 is the most popular version and backward compatible too.

Angular 2 was a paradigm shift from AngularJS because not just the language but the basic architecture and approach to data binding had been changed. Still, both AngularJS and Angular continue to be used by programmers and web developers according to their requirements.

Let us look at the key differentiating factors in Angular vs AngularJS:

AngularJS supports the MVC or Model View Controller architecture. You put the business logic in the model, the desired output in the controller, and Angular does all the processing to derive that output. The model pipelines are automatically generated by AngularJS.

By contrast, components and directives form the building block of Angular. Components are nothing but directives with a predefined template. They provide a modern structure to the applications, making it easier to create and maintain larger applications.

As mentioned earlier, AngularJS uses JavaScript but Angular 2 and later versions (clubbed together as Angular 2+ for the sake of discussions) use TypeScript. TypeScript is the superset of JavaScript and provides static typing during the development process. Static typing not just improves performance but avoids many runtime pitfalls that were making AngularJS difficult to use for larger and complex applications.

Angular 2+ ship with their own command-line interface or CLI. It is used for generating components, services, etc. and even complete projects quickly and efficiently. You can easily generate different versions of the same project for different platforms with dynamic type checking, linting, etc. AngularJS does not have a CLI of its own.

When it comes to dealing with data binding, Angular is more intuitive than AngularJS. An AngularJS developer must remember the correct ng directive for binding a property or an event. In the case of Angular, the language uses () for event binding and [] for property binding.

Two-way binding, which made the original Angular JS popular among web developers has proved to be its undoing as more and more complex applications are being developed using it. To ensure and implement two-way binding, AngularJS keeps checking each scoped variable with its previous value using a digest cycle. The running of this digest cycle is random and hence as the size of the program grows, the checking can go on infinitely, impacting application performance.

In contrast, Angular has a flux architecture where change detection is done through unidirectional data flow, making applications much faster.

AngularJS does not provide mobile development support but Angular does. This renders AngularJS a bit antediluvian in this age of mobile-first computing.

Angular vs AngularJS: Advantages and Disadvantages

Angular and Angular JS have advantages and disadvantages of their own. Here we list damn so that you can make your own choices depending upon your specific requirements.

Should I choose Angular or AngularJS?

If you look at the long list of advantages of Angular, choosing Angular over AngularJS seems to make sense. However, you must not forget the steep learning curve for using Angular. If you have a fairly simple and straightforward application to develop, AngularJS can make development faster and easier. But if you are looking to develop complex applications that must be scalable, Angular should be your obvious choice.

Considering that Angular has a steep learning curve you can hire Angular developers or Angular development company to make your work easier. As a developer or a business owner, investing in Angular would be a positive step in the right direction.

When AngularJS was first released, it gained popularity among web developers because of its in-built features like two-way binding, the ability to develop responsive web applications, and highly responsive designs. However, its drawbacks were highlighted once other front-end development frameworks like ReactJS were launched, which had better performance. As mentioned earlier, AngularJS was rewritten into Angular 2 to provide a better alternative to the web developers.

Currently Angular provides the best alternative for building large and complex applications. The development team at Google is working towards reducing the build size of Angular applications and enhancing their performance.
Angular is the framework for the future. Google shifted to TypeScript to improve the maintainability of the code as well as the overall performance of applications. Angular now seems geared towards enterprise-level application development.

Also Read:
Angular vs React: Which Framework to Choose for Your Mobile App?

As the complexity and size of an application grow, engineers, find that developing and maintaining these applications using the so-called easy to learn, deploy, and maintain frameworks like ReactJS starts getting difficult. If Angular is used instead, the steep learning curve is balanced out by stability and technical support. By pledging long-term support (LTS) for Angular, Google has further positioned it for the long term, scalable and resource-intensive projects.

TechAhead is a mobile app development company that drives customer success. Contact us now to get your own feature rich mobile application.