What you must know about Kubernetes and Docker before deployment

What you must know about Kubernetes and Docker before deployment 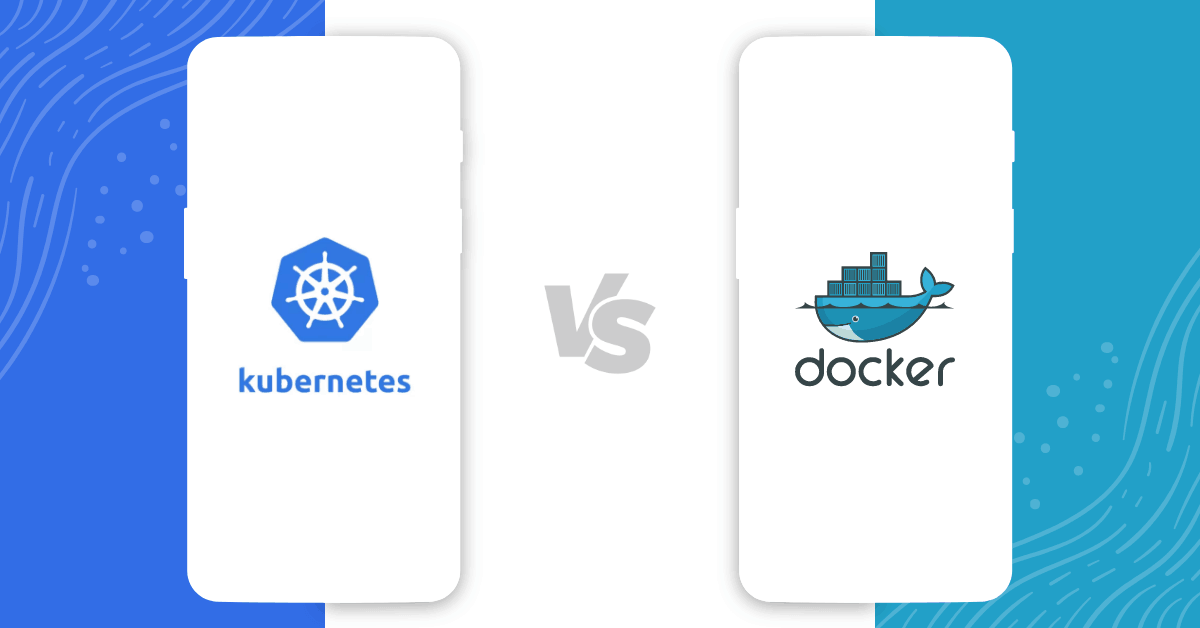 Docker and Kubernetes may appear to be akin as both allow running applications within Linux containers. But in actual, both the technologies operate at various layers of the stack; however, you can use these technologies together. While Docker is a platform for containerization, Kubernetes is an orchestrator for Docker.

Containers help developers maintain consistency across different platforms, from mobile application development through to the production process. Developers can have more control over the application in comparison to the conventional virtualization techniques. It is accomplished by isolation, which occurs at the kernel level without any client operating system. Further, it results in higher scalability, faster deployment, and adjacent consistency among various development platforms.

Docker and the rise of containerization

Talking about the Docker is impractical without first explaining the platform of the container. Though things appear simple at the time of writing code, the complexity arises while transferring this code to the production environment. The reason behind this common issue is that the code that works well on the developer’s machine fails to respond in production. It could be due to different libraries, different dependencies, and operating systems.

Containers resolve the portability issues by separating the code from the underlying environment it runs over. Developers can bring all the bins, libraries, and other elements in one place into a container image. This container image is accessible on any computer in the production environment with a containerization platform. 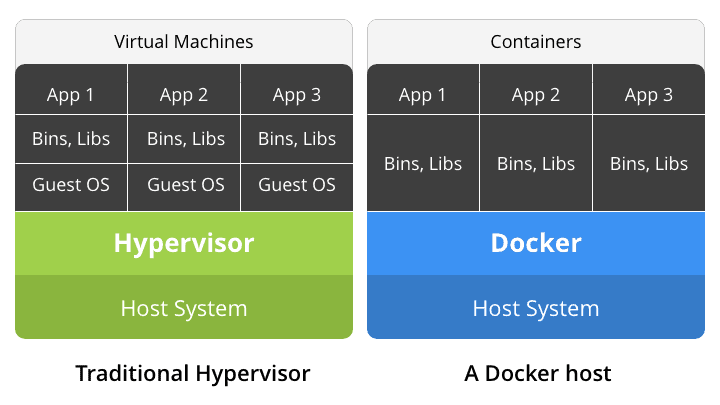 The Docker works on a client-server architecture. Docker Engine and its components allow the user to build, assemble, ship, and execute applications. The components of the Docker Engine include Docker Daemon, REST API, and Command Line Interface.

Docker Daemon: Docker Daemon works as per API requests and manages the Docker objects such as the containers, volumes, images, and networks accordingly. For managing the Docker services, a daemon can communicate to peer daemons.

The Docker Client: Docker client (Docker) is the primary route for interaction between Docker users and the Docker and can communicate with multiple daemons. When user inputs command such as 'docker run,' the client transfers it to ‘dockerd’ (Daemon), which carries the command further.

Docker Registries: Docker registry is proprietary storage for Docker images. The default public registry for Docker is Docker Hub. Users are free to run their private registry, though. On entering ‘docker run’ or ‘docker pull’ command, it retrieves the required images from the registry that the Docker currently configures.

Docker Objects: The elements that you create while using Docker such as the images, networks, plugins, containers, volumes, etc. refer to as Docker Objects.

Kubernetes is an open-source orchestration tool designed to build application services with the capability to stretch over various containers. Also, it allows scheduling containers across a cluster, scaling containers as well as managing the health of the containers over a regular interval of time. 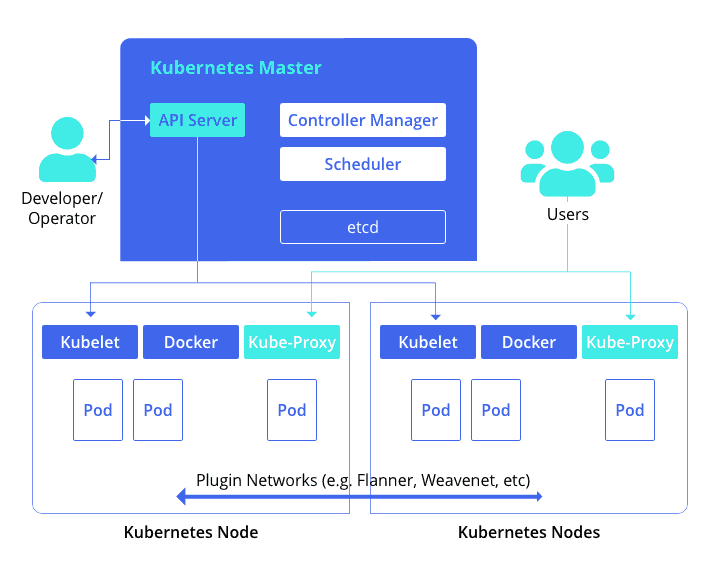 The two fundamental concepts associated with Kubernetes clusters include the Node and the Pod. The node is a term used for bare metal servers and virtual machines that Kubernetes manages. The word 'Pod' is a unit of deployment and a collection of associated Docker containers that coexist together.

On Kubernetes Master node, we have:

Kube-Controller Manager: It listens to Kube API Server to retrieve information about the current state of the cluster. It takes into account the existing state of the Kubernetes clusters and makes decisions on achieving the required state after that.

Kube-API Server: It is the API server that unveils the Kubernetes’ levers and gears. Command-line utility (CLI) and WebUI dashboards use Kube-apiserver. Human operators use these utilities for interacting with the Kubernetes clusters.

Kube-Scheduler: It decides how it arranges the jobs and events across the cluster. The scheduling depends upon the availability of resources, guidelines, policies, and permissions set by the operator, etc. Similar to Kube-controller-manager, Kube-scheduler too listens to the Kube-Episerver to acquire information about the state of the cluster.

etcd: etcd is the storage stack for the master node, and developers use it for storing definitions, policies, state of the system, secrets, etc.

On Kubernetes worker node we have:

Docker: Each node possesses the Docker engine for managing the containers.

Kubernetes can run without Docker, and Docker can work without Kubernetes. But they function efficiently and can build an excellent cloud infrastructure when deployed together.

Can you use Docker without Kubernetes?

In the development environment, Docker is commonly used without Kubernetes. The advantages of using container orchestrator like Kubernetes fails to counterbalance the cost of additional complexities in the production environments.

Can you use Kubernetes without Docker?

Why should you consider moving to Kubernetes?

Since organizations across the globe are moving to cloud architectures that use containers, a trusted and tested platform is the need of the hour. Several significant reasons are compelling the organizations to move to Kubernetes that includes:

On the other side, Docker incorporates several drawbacks that make it a less feasible option among large business setups.

Despite numerous similarities and differences, it is not easy to explain these two containerization platforms accurately. Though Docker is an easy and simple solution to work with, Kubernetes brings along a lot of complexities.

Docker is an ideal solution for organizations where fast and effortless deployment is required, whereas Kubernetes is highly applicable for production environments where complex applications are running over large clusters.

Which is better: Kubernetes or Docker?

Both Kubernetes and Docker container orchestration tools are long term players- they are transforming swiftly to align with the growing industrial needs.

Since both the platforms offer considerable benefits and the developers can deploy either, as per the business-specific requirements, it is difficult to conclude as to which one is better.

Why should I use Kubernetes?

Kubernetes is an open-source container orchestration tool that allows better management, is cost-efficient, offers scalability, and high availability with dozens of other benefits that make it an ideal option for large businesses.

Why is Kubernetes called k8s?